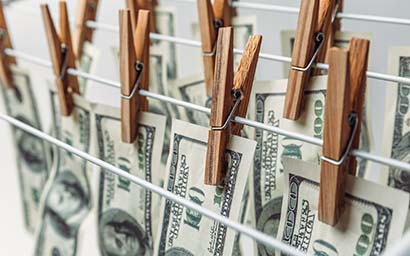 In a scene out of a Hollywood gangster film, millions of pounds of cash were being carried into a Bradford jewellers Fowler Oldfield. Those couriering the cash had convictions for drugs offences and fraud (amongst other things). The jewellers were quite clearly serving as a money laundering front for these criminals.

The case has attracted some attention in recent months, as the Financial Conduct Authority (FCA) has accused Natwest (who provided the gold dealer with banking services) of breaching anti money laundering regulations when handling a string of cash deposits made between November 2011 and October 2016. A first hearing has already taken place at the Westminster Magistrates’ Court on 14 April 2021 and it is an example of the FCA taking a tougher approach towards banks and therefore others that handle large amounts of cash.

Money laundering is the process by which the proceeds of crime are converted into assets which appear to have a legitimate origin, so that they can be retained permanently or recycled into further criminal enterprises.

In simple terms: It is a way for criminals to disguise the illegal source of their money and it can range from sophisticated financial schemes or like in the Fowler Oldfield case criminals turning up to a jewellers with large bags of cash. The purpose of it is all the same though – to hide ‘dirty money’ made from criminal activities such as illegal arms sales, drug trafficking, prostitution, insider trading, theft or tax evasion.

Money laundering offences are defined in Part 7 of the Proceeds of Crime Act 2002 (POCA) and carry lengthy prison sentences.

What are the risks posed to those in the jewellery industry?

As the Fowler Oldfield case demonstrates, jewellers will often be a target for criminals as it is relatively easy to launder money through the selling of high-end items such as jewellery and precious metals. That is why it is vital for jewellers to be vigilant and have proper anti money laundering regulations in place, so that they are not caught unawares.

The ways in which you can do this are relatively simple and straightforward. First, it is important that you have proper KYC principles in place for business partners that are suppliers or customers of diamonds, gold and platinum group metals or jewellery products containing these. You do that by establishing the identity of the supplier and customer, and where there is a trigger, you have proper reporting protocols in place. The failure to disclose is a separate criminal offence under Section 330 of POCA.

Second, you take proper advice from a solicitor or lawyer on what the applicable regulations are and that you put in place proper risk assessments. Those risk assessments will establish where a report may need to be triggered, such as with customers who regularly transact through third parties, like lawyers or accountants, or those that deal in large amounts of cash.

If you require further information on what steps you should be taking to comply with your money laundering regulations, then you should take proper legal advice.

What are the defences to money laundering?

Given that there are numerous offences under Part 7 of POCA, the defences will differ. If you face an allegation of concealing criminal property, which is quite common for those handling large amounts of money, then an offence will not committed if you have made an suspicious activity report (SAR) within the timescales set out in Section 338 of POCA. This defence can also apply where you can demonstrate that you intended to make the disclosure, but could not do so, because you had some reasonable excuse.

Another defence is where you know, or had reasonable grounds to believe, that the relevant criminal conduct occurred outside the UK, or fell within the “Exceptions to Overseas Conduct”.

If you are facing an allegation of failing to disclose, then a defence under Section 330 (6) will be if you had a reasonable excuse for failing to disclose the suspicion or under Section 330 (7) that you knew or had reasonable grounds to believe that the money laundering was occurring outside of the UK and that this money laundering was not unlawful in that country.

What if you find yourself being accused of money laundering?

If you have been accused of money laundering and face a criminal investigation, then it is vital that you immediately seek legal advice. A proper assessment of your internal compliance can be carried out and a solicitor will be able to work with you to establish whether you have a viable defence.

Examples of our recent work: